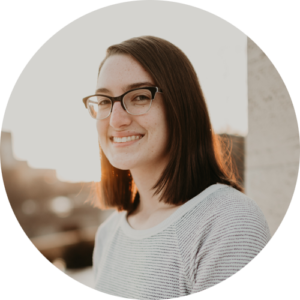 The collegiate marching band experience is significant to many people who participate in the activity. The band fosters meaningful relationships and lifelong memories for its members, and the stories they take with them can be pretty incredible.

For this project, current members and alumni of the fourteen Big Ten Conference marching bands were asked to respond to the following: “Please share one memory from your time in college band. It can be anything that has stuck with you over the years—something you will never forget.”

More Than Music is a book containing over 50 stories, spanning years from the 1980s to 2019. The “slice of life” approach highlights the side of marching band that the audience doesn’t often get to see—the camaraderie, support, hard work, laughter, and pride. Though multiple bands are represented, many of the memories share common themes and values. It goes to show that bandsmen share a bond, no matter which university they attend, and that being a member of a marching band is an experience like no other.

Read the Book on Issuu »

About Miranda
Experience
Awards and Recognition

The book was printed through Blurb. It features an image-wrap hardcover and 140 full-color pages.

Due to the COVID-19 pandemic, the Spring Capstone Exhibition in UNL’s Eisentrager-Howard Gallery was cancelled. The display plan for this project (right) was to show the printed book alongside a few items from the University of Nebraska Bands’ collection. The Cornhusker Marching Band uniform was included because parts of the jacket were used as visual assets in the page design. The two other items were chosen because they were given as gifts to the CMB and are examples of camaraderie among Big Ten marching bands. The following are descriptions that would have been posted next to the items:

Drumhead
Gifted to the Cornhusker Marching Band by the Marching Illini during the CMB’s visit to Illinois in 2015. It is signed by the members of the 2015 Marching Illini and includes a welcome message from director Barry L. Houser, which reads, “Welcome Cornhusker Marching Band! We hope you have a great time on campus and enjoy the sights and sounds of our version of Memorial Stadium! We are glad you are here! All the best!”

Shako
Gifted to the Cornhusker Marching Band by the University of Minnesota Marching Band during the UMMB’s visit to Nebraska in 2018. This was the Minnesota band’s first conference road trip in over 20 years. 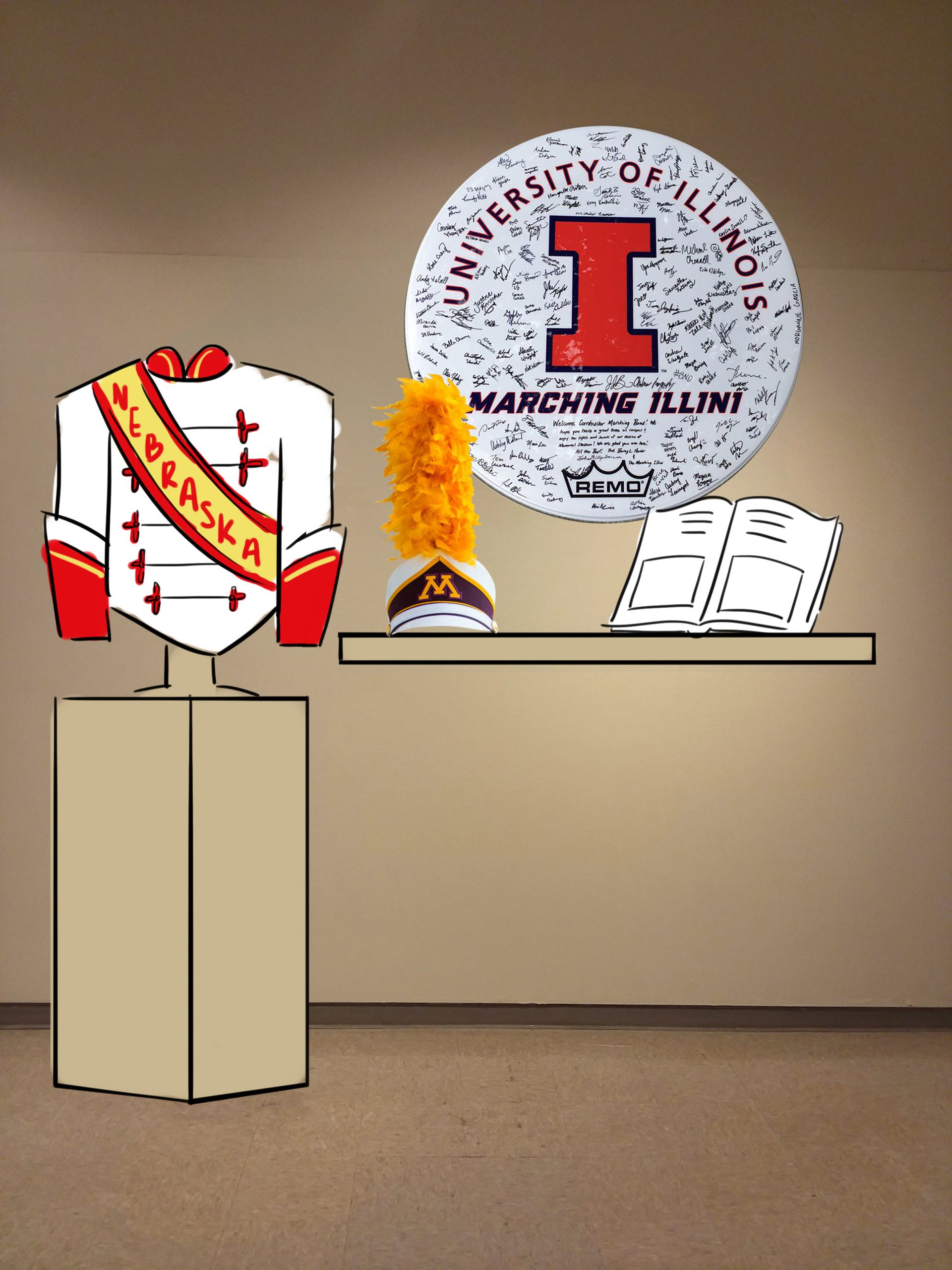 Research was conducted in the form of a survey, which collected stories from Big Ten band members and alumni, as well as information including when they were in band and which school they attended. The purpose was to explore what commonalities appeared in the submissions, especially between different schools and age groups.

Within the first six days, the survey received 89 responses, with 51% coming from Nebraska Cornhusker Marching Band members and alumni. After the sixth day, the survey link was posted again to “I’m a Member of a Big Ten Marching Band” in an attempt to collect more responses from the other Big Ten schools, and was closed after two more days. A total of 135 responses were submitted, which were used for the original data analysis and thesis proposal.

Several months into the project, the survey was reopened for the purpose of collecting more stories and received 12 additional responses. The data analysis has been updated to include those responses. 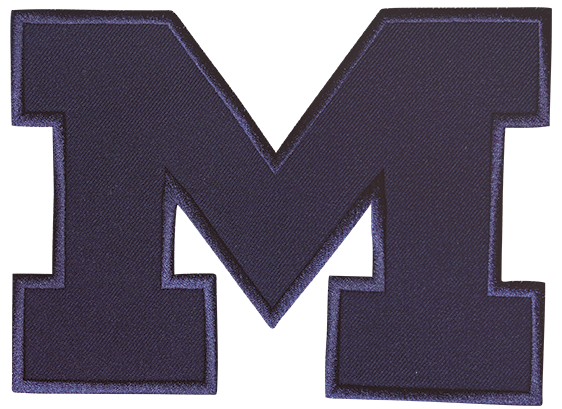 Detail from University of Michigan uniform.

Which school did you attend/are you attending?
In total, the survey received 147 submissions. The University of Nebraska received the most responses of the fourteen schools in the conference.

In which decade was your last year of marching band?
118 responses were from current band members and recent alumni.

Which instrument(s) did you play?
Piccolo players were the most represented instrument group out of survey respondents, followed by mellophone and trumpet. The option to choose multiple instruments was provided, and nine respondents choose two instruments. Three of those respondents selected both flute and piccolo, which contributed to the high number of flute/piccolo players. There was also a fill-in-the-blank option, and the following categories were added by respondents: undergraduate staff, flugelhorn, Big Ten flag corps, and graduate assistant.

Please tell me ONE story from your time in college band. It can be anything that has stuck with you over the years—something you will never forget.
Each respondent was asked to submit one memory from their time in college marching band. I wished to know which common themes appeared among the memories, especially between different bands. The most common theme was that of performances and football games, including positive interactions with and support from fans; the experience of marching the band’s pregame show in front of a live audience for the first time; winning important games/big upsets; and bowl game performances. The next most common theme had to do with friendships formed in band, including spending time together during trips; bonding during band camp; finding support in one another after a tragedy; and having positive interactions with other marching bands. The remaining responses mentioned enjoyment of specific trip locations and sightseeing, as well as enduring extreme weather events. Fourteen of the submissions referenced a variety of topics, which didn’t fit with the previously listed themes. These stories were grouped into a category labeled “Other.”

I give permission for my submission and photo to be presented publicly as part of the final product. 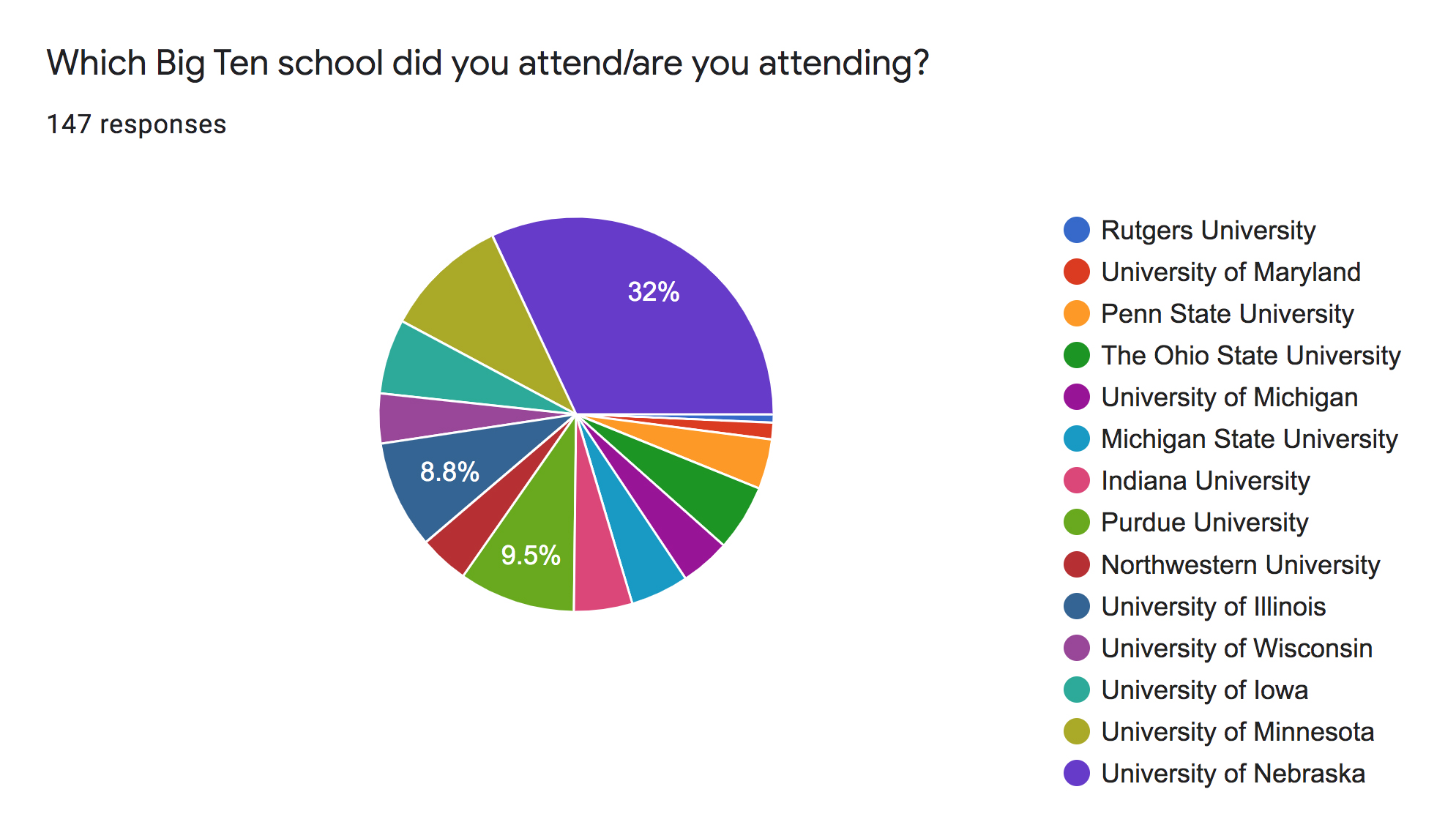 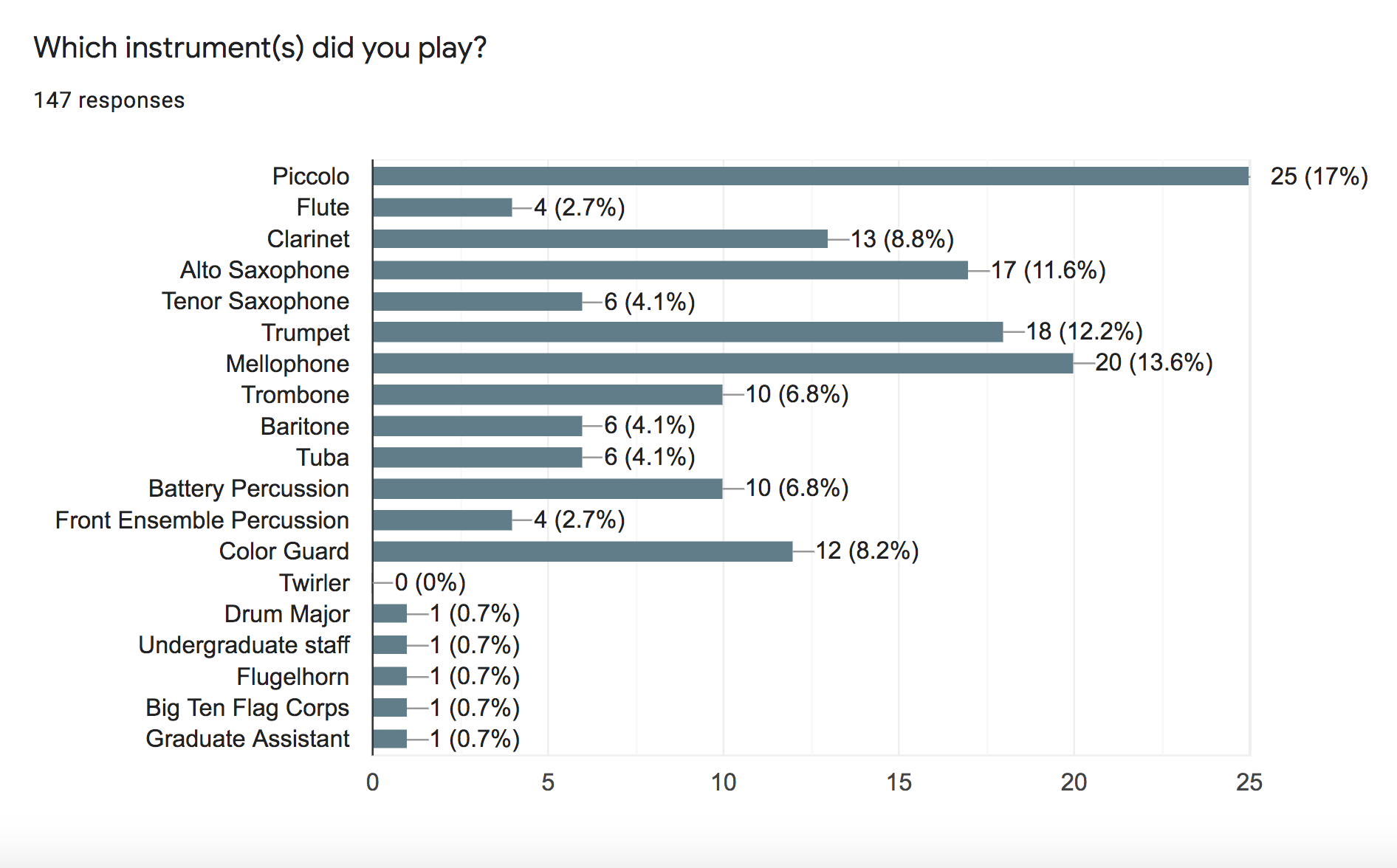 Once the submissions had been collected, the next task was to organize them. Since the project’s purpose was to emphasize common experiences among different bands, the stories were sorted by topic, similarly to what was discussed in the data analysis, but broken down further. Eventually, nine chapters emerged:

It should be noted that not all submissions were included in the book (67 of 147 were used); some were excluded at the request of respondents, and others were left out due to lack of context.

Additional sections in the book include an introduction, a list of all of the bands in the conference and their nicknames, acknowledgments, an “about the curator (author)” section, four pages of bonus photos that were submitted but their accompanying stories not used, end notes, and photo credits. 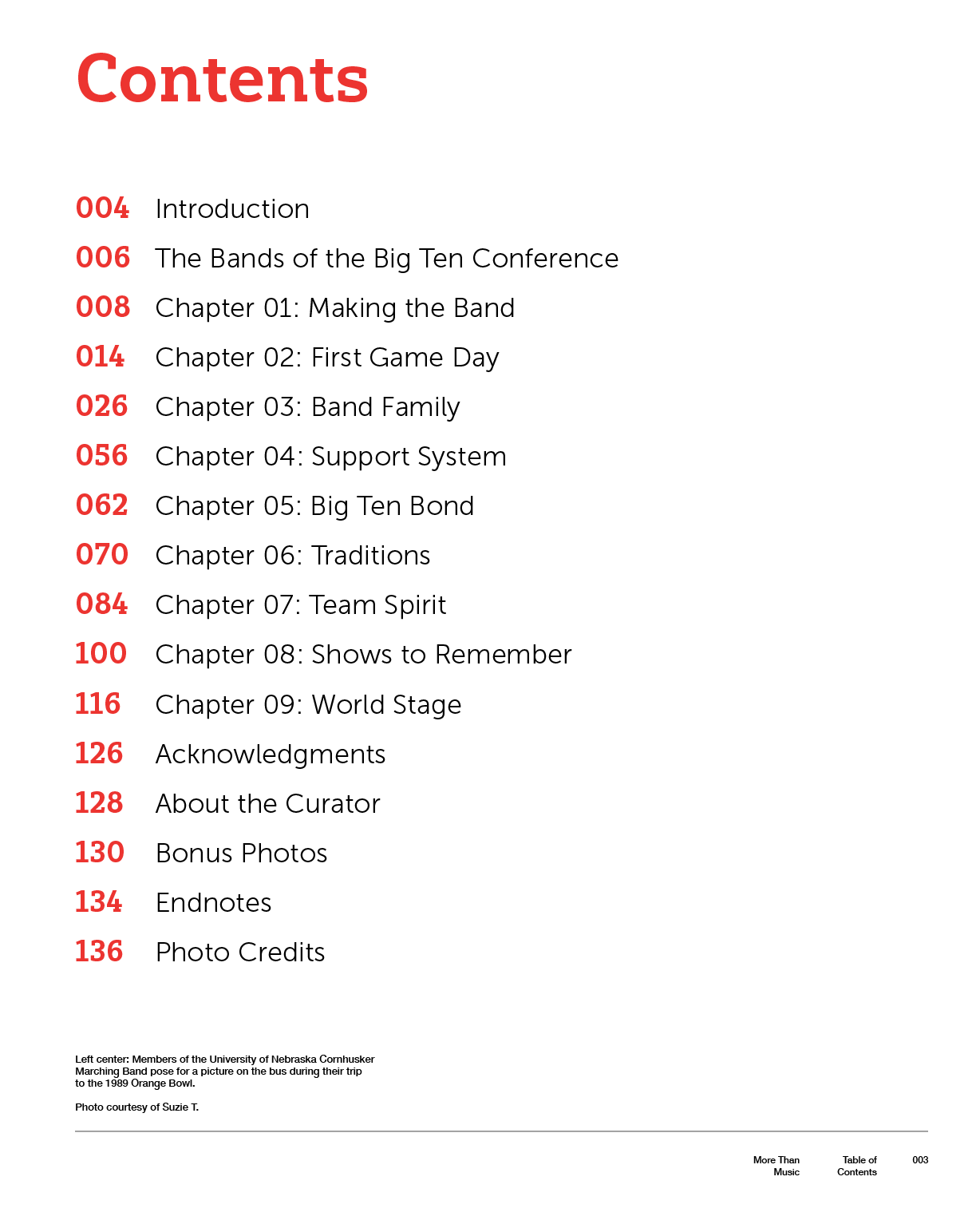 Visual Assets
Photos from the respondents’ submissions were used alongside their relative stories. Photos were also acquired from several official band photographers; some were delivered at no charge and others were purchased online, all under a personal use agreement.

One of the first concepts for the book involved a nostalgic, scrapbook feel. The original plan was to use photos of each school’s uniform. I photographed my Nebraska band uniform, but only a few schools (Illinois, Michigan, and Purdue) responded to the request for photos. I still wished to move ahead with this idea, so I was forced to get creative. I was able to find photos of a few Maryland band memorabilia items (pins, band letter), and I went to ShutterStock for photos of instruments, which expanded my options, though not ideal.

Colors
The original plan for the color palette was to use the school colors of the Big Ten Conference. However, all of the basic colors are used at least once within the conference. Next, I tried to only use the most common colors (red, blue, black, yellow), but that excluded schools like Northwestern (purple) and Michigan State (green). Additionally, the particular shades that were at that moment were all very basic and saturated. Eventually I abandoned the idea of using school colors and tweaked the palette into something softer and more pleasing to the eye.

Each image in the final version received a vintage treatment for continuity. 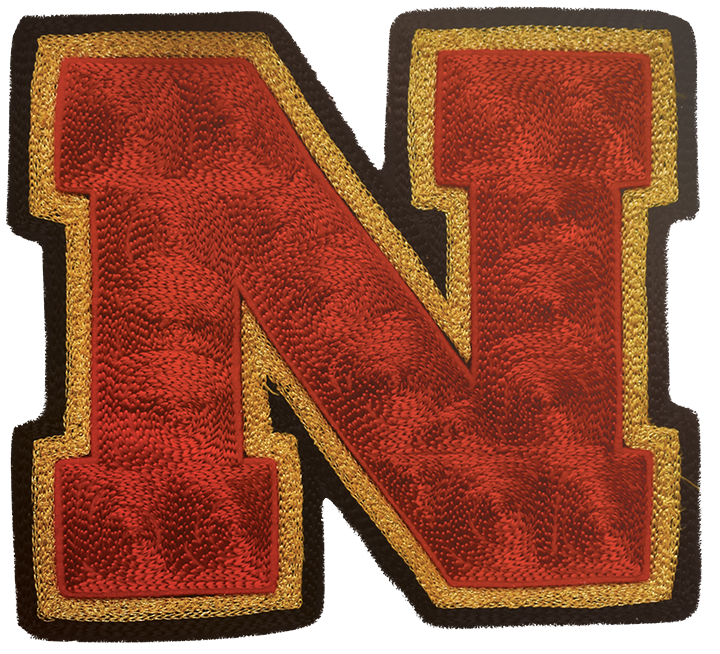 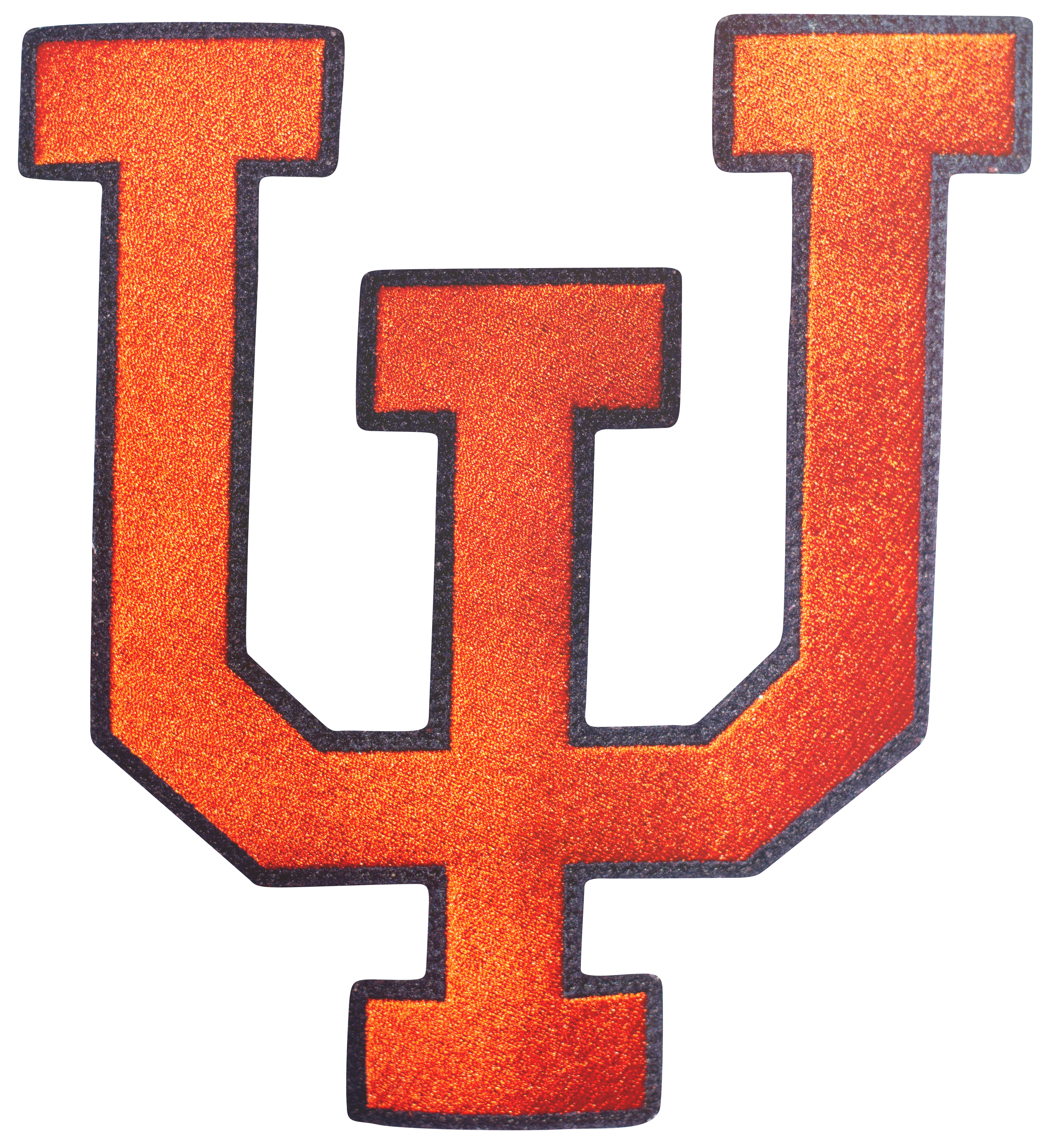 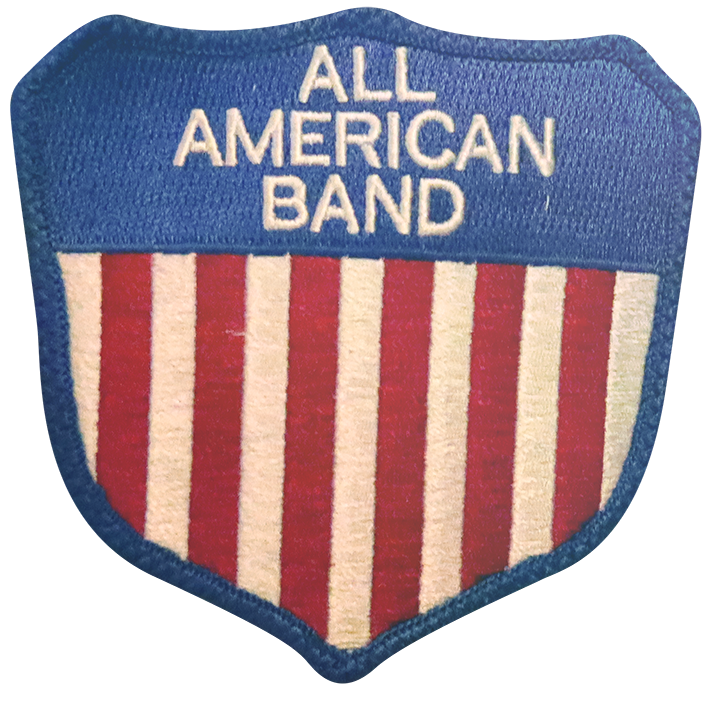 Assist designers with original print projects for internal foundation use and all four University of Nebraska campuses. Create layouts for marketing and event materials such as flyers and invitations, which are distributed to 200 – 500 donors per event. Maintain brand standards for each campus and the foundation while creating unique designs. Meet directly with project manager and clients to discuss project aims and timeline. Prepare and package documents for print production, taking into consideration ink and paper types to ensure the highest quality. Communicate with print vendors to request estimates and orders; send packaged files along with production, timeline, and delivery specifications. Make edits to copy, update past work for current use, and file completed projects for archive.

Design marketing and recruiting materials for the University of Nebraska Glenn Korff School of Music, including posters, brochures, flyers, print advertisements, logos, and social media graphics. Advertisements are published in regional Midwest music educator magazines as well as national instrument- and genre-specific magazines, which reach between 500 – 3,000 customers per publication. Recruiting posters and flyers are distributed to up to 3,000 clients nationwide. All designs must follow university brand standards while remaining fresh and engaging. Work directly with the Marketing & Public Relations Coordinator to discuss project goals, timeline, and scope. For higher profile projects, work directly with clients. Prepare all files for production at UNL Printing Services according to their guidelines.