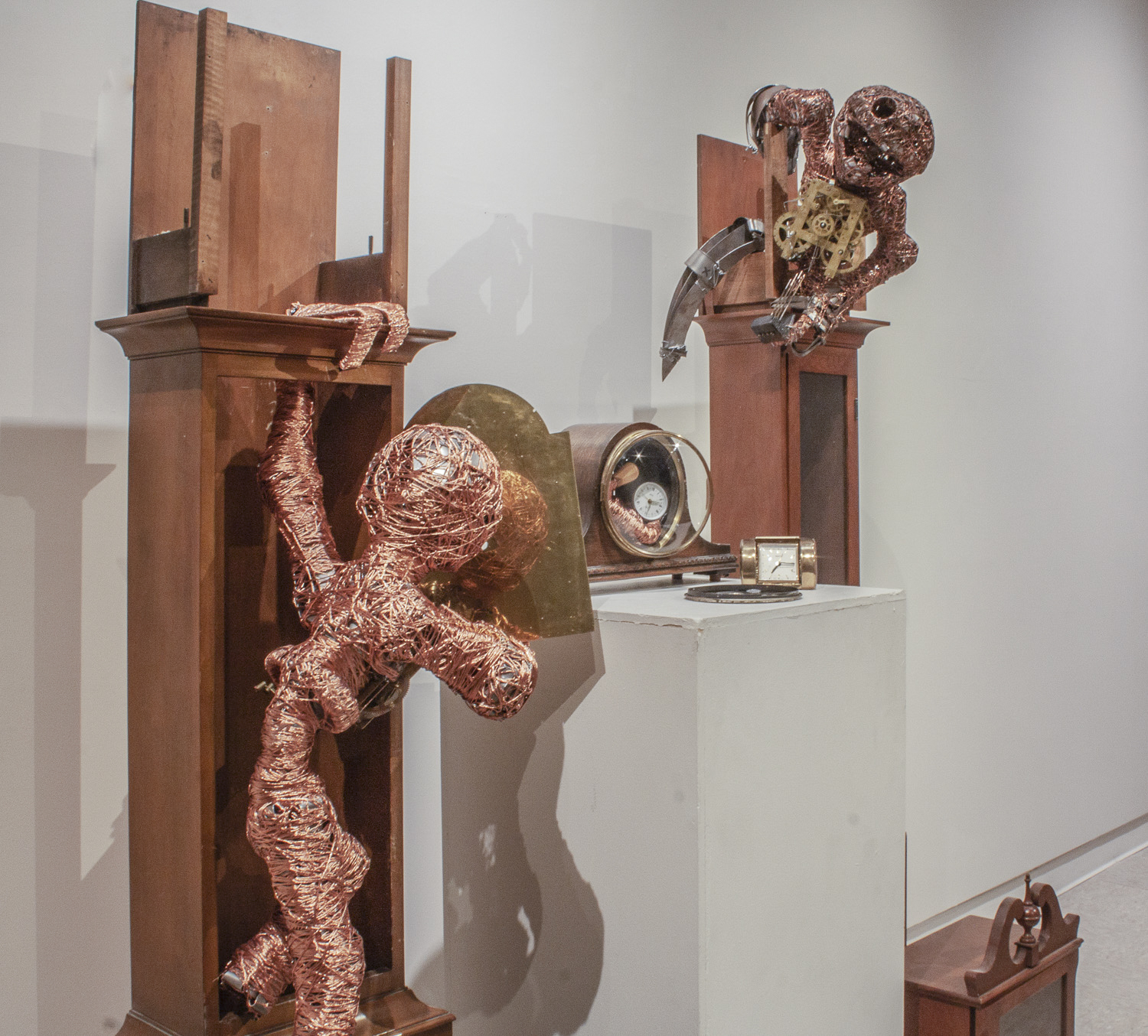 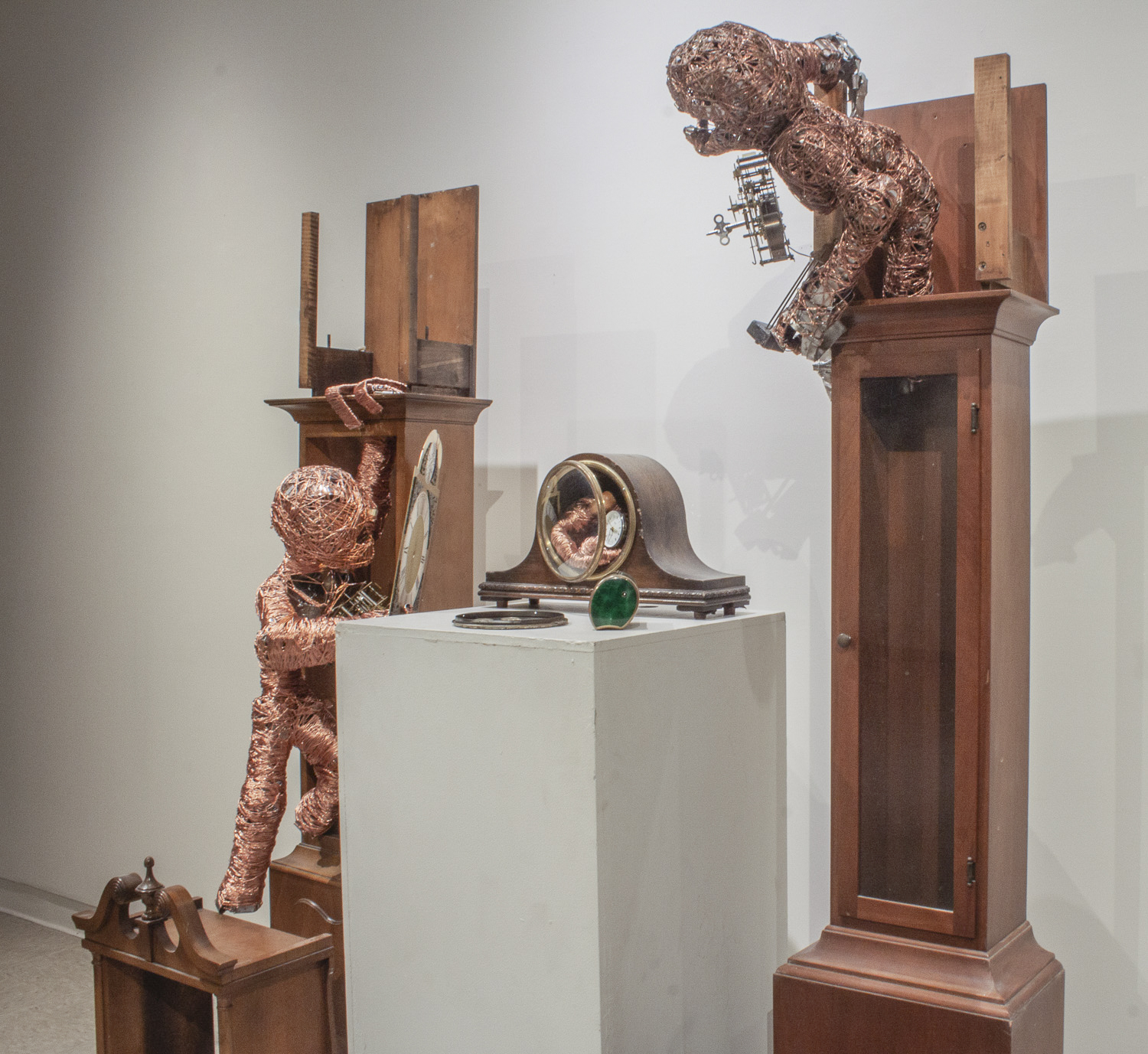 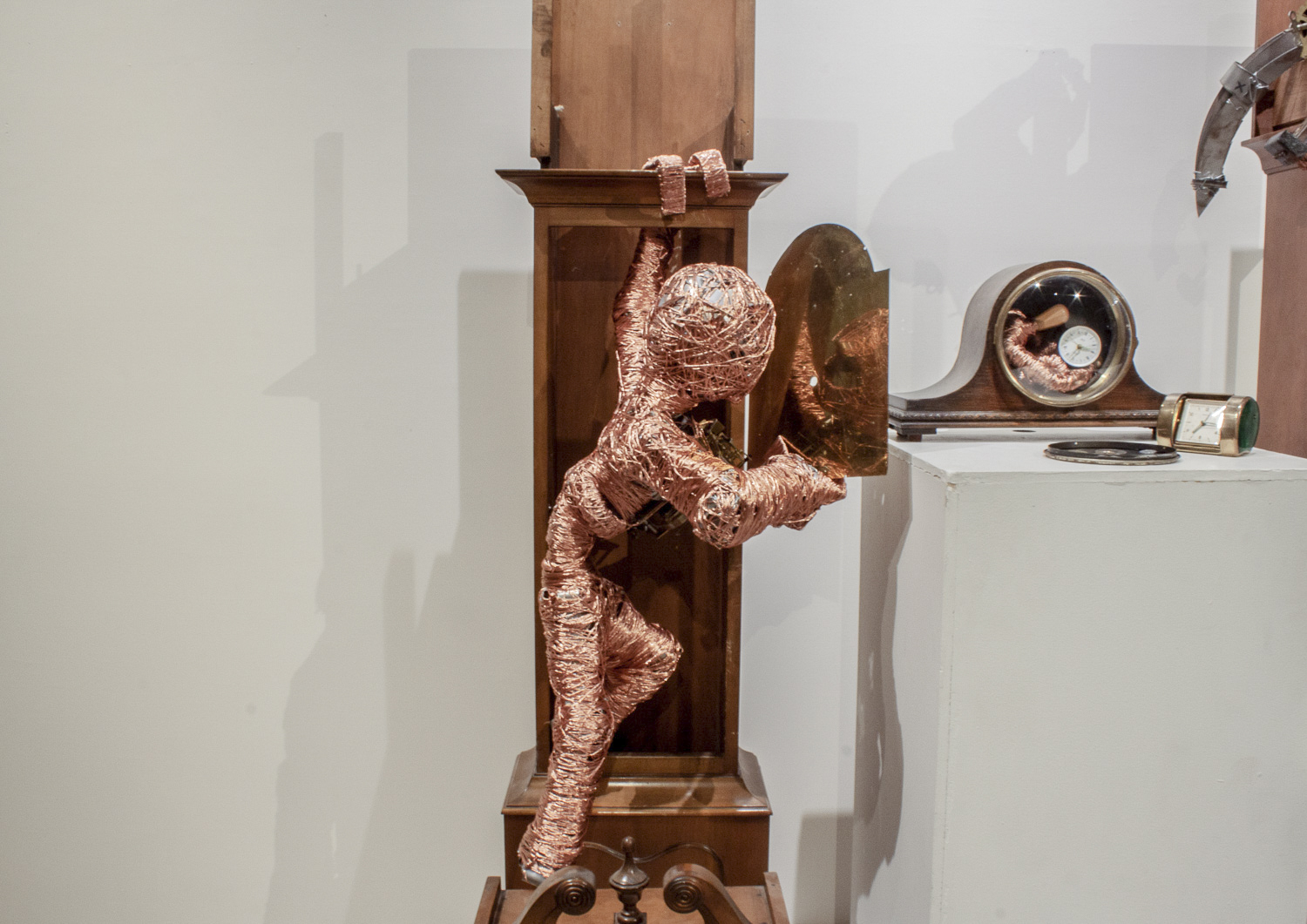 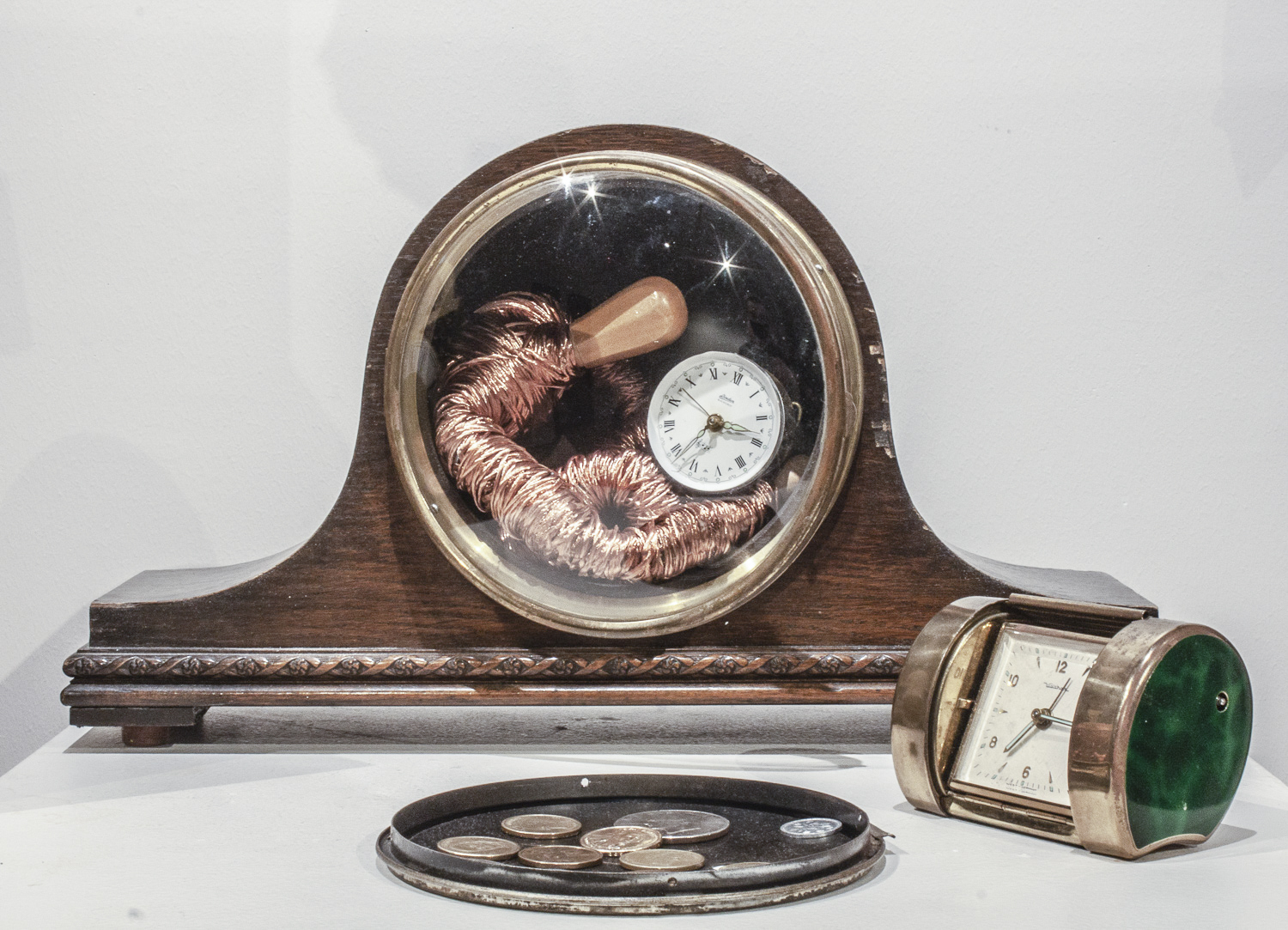 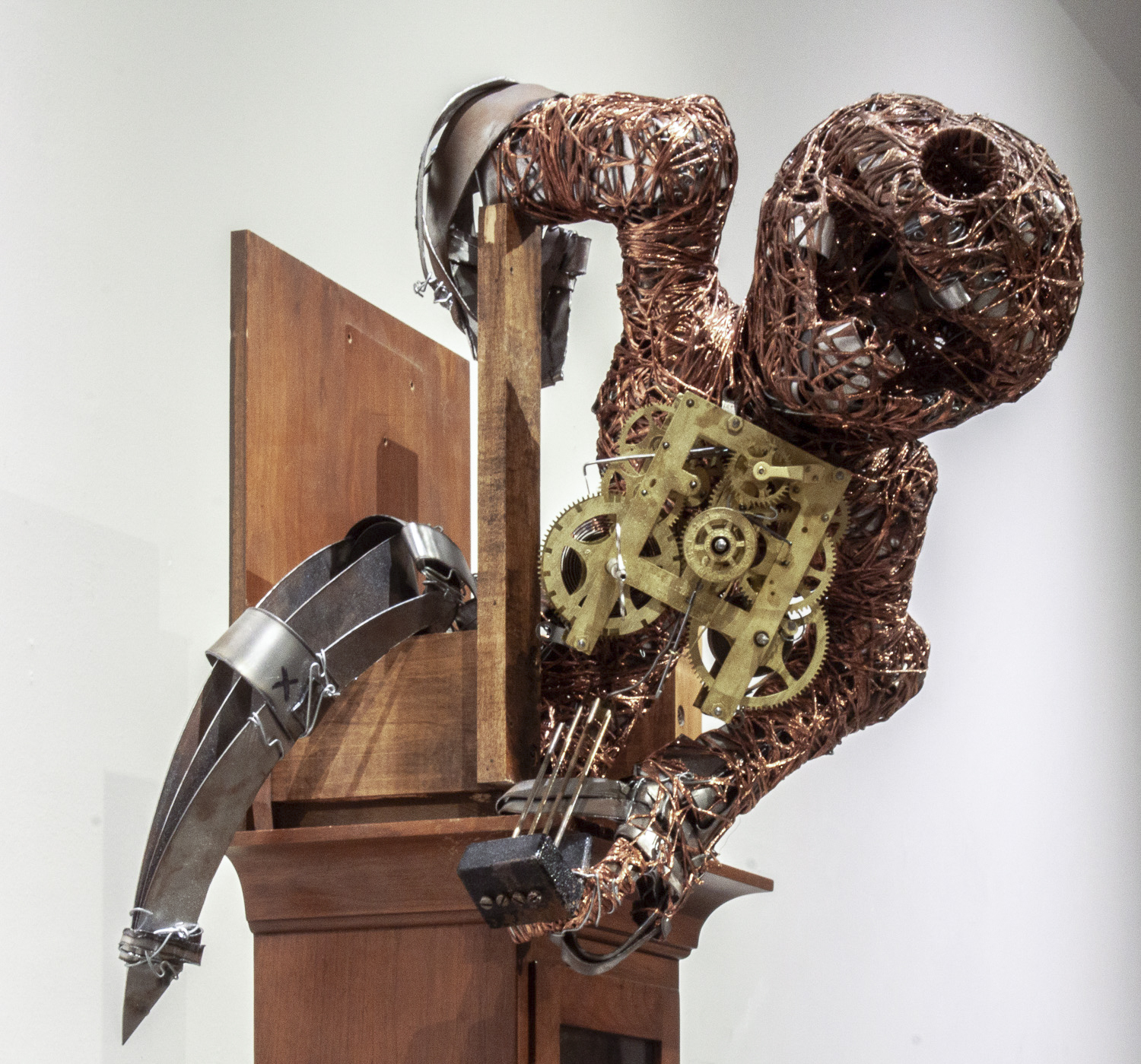 I believe that the idea of time is seen through different frames of reference, affected by historical and spiritual factors. “These Shrines to Time” revolves around this concept of time, using figures of deities from ancient Greek mythology to show how time was conveyed in the past with modern context. I use reclaimed clockwork and antique found objects alongside of the hand built steel, wire, and wooden figures to build these modern day interpretations of those shrines and effigies for gods from times long past, comparing our separate concepts of time. My process of building up surface texture and layers of material via binding, weaving, and wrapping copper over steel in these sculptures is left evident to convey the amount of time sunk into each object.

Each figure represents a particular ancient deity; Kairos, Aion, and Chronos from left to right. Each separate deity portrays time in different ways with many similarities and differences to define each and I have used unique offerings to each figure to indicate who they represent and their purpose. Kairos is the personification of opportunistic time and the golden moment who represents time in its most imbalanced form, so I offered up a violently unraveled clock movement from a memorable moment. Aion is the god of cyclical time, representing time as a never-ending cycle, and I offered coins from places and times I can never return to. Lastly, Chronos is the god of empirical and linear time, and I offered the tool of harvest and his own demise, a sickle, to indicate finality.

Dahlia Mosko is a sculptor and painter working out of Lincoln, Nebraska and producing work since 2018. Mosko graduated with her Bachelor’s Degree in Fine Arts from the University of Nebraska-Lincoln in May of 2021. Her sculptures are comprised of welded steel frames and copper wire meticulously threaded throughout the structure to build form and figure. Mosko’s goal for is to create pieces that properly portray her perspective on religion, time, and the dichotomies between femininity and masculinity. Her work was shown in the 33rd Annual Juried Undergraduate Exhibition at the Eisentrager-Howard Gallery in 2020.